It was in the December 2021 issue of Model Rail, that Graham Goodchild demonstrated how to create dioramas by putting railway models into glass jars. The two items he produced were modelled in 2mm and 009, portraying small industrial locations with a small amunt of stock and very nicey nmodelled scenics.

I mused on this for a while, gazing longingly at a large jar of hot-dogs and reckoning that the jar would be a good candidate for trying something similar. I also wondered if it would be possible to get a complete passenger train, a station and some houses into the jar in N Gauge.

And so it was that this 'dyed in the wool' North Eastern moddeller who never works in the smaller scales, set out to create a Great Western branch line station with an autocoach and a 14XX in front of a scale length station building with some cottages and passengers. The photo is the result of my work. The 14XX was bought as a non-runner, the coach second hand, and the buildings knocked up on the computer.

Now, that's not the end of the story, for when I showed the completed model to Andrew, he was immediately taken with the idea of having a go at something similar.

This is the product of Andrew's labours. 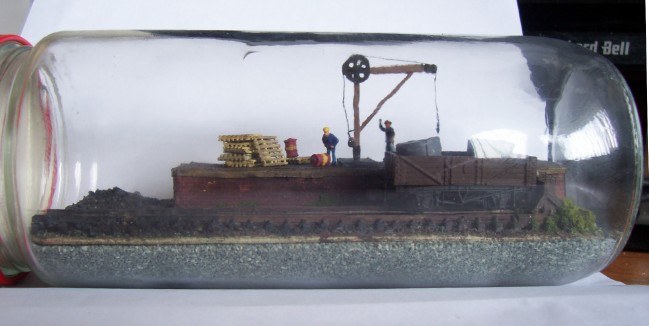 This description by Andrew - a fuller version will appear in the N Gauge Journal.

Being inclined towards the industrial side of BR operations, I thought a small loading dock, with facilities for coal to be offloaded alongside, might make an interesting model. So having obtained a suitably-sized jar, which once contained hotdogs (needless to say, these were consumed by myself), I now set about constructing the diorama. A piece of card, roughly about 2mm thick, and measuring 6• x 2• was used for the base, the actual loading dock was also constructed from card, the Metcalfe brick variety. This was not only used to form the loading dock wall, but also the top/road surface, while offcuts of the same material were used as reinforcements underneath the structure.

A short length of Peco track forms the siding, a small section of Metcalfe cobbled sheet was used for the area where coal would be dropped from a coal wagon. As for the coal itself, this was represented using course ballast, glued into place, then painted a 'coal-like' colour. I then added details such as pallets, sacks, one or two figures, also a small crane. The latter is a Ratio kit, which was straightforward enough to assemble, and once this was completed, it was weathered along with the rest of the model.

Once completed, I glued the crane to the loading dock, but when I then tried to insert the completed loading dock model into the jar, it appeared I‘d not taken into consideration the height of the goods yard crane, which protruded above the top of the opening of the jar. So the only solution was to remove the crane, insert the loading dock into the jar, then using an improvised hook, i.e. a length of piano wire (the type used in model aircraft), slightly bent at one end, which I used to position the crane into place. A bit fiddly, but I got there in end, though I guess that will teach me to maybe plan a bit more carefully in future!